WhatsApp as usual is busy testing new features. The Facebook-owned messaging service most recently unveiled its Stickers functionality after months of testing, and while it working on enhancing stickers on its platform by adding a dedicated search feature and the ability to create custom stickers, it is now rumoured to bring an ability to let users share their contact information via a QR code. At first glance, the feature certainly sounds similar to the Nametag feature available on Instagram for some time. It is also reported that WhatsApp is in plans to bring an easier way to let users add a new contact directly from the app.

WABetaInfo reports that WhatsApp is working on a feature called "Share Contact Info via QR" that will let users share their contact details to other WhatsApp users via a QR code. The feature would work similar to how the Nametag feature works on Instagram or how Snapcode works on Snapchat. WABetaInfo folks have shared a few screenshots to detail the advanced contact-sharing feature.

The screenshots show that users will be able to add a new contact on WhatsApp by simply scanning the QR code of that contact. Once the app detects and recognises the QR code correctly, it will fill all the fields and then add the contact in the address book without any external efforts. Similar is the case if you want others to add your contact details to their address book. It is also said that WhatsApp will provide you with the ability to revoke your QR code. 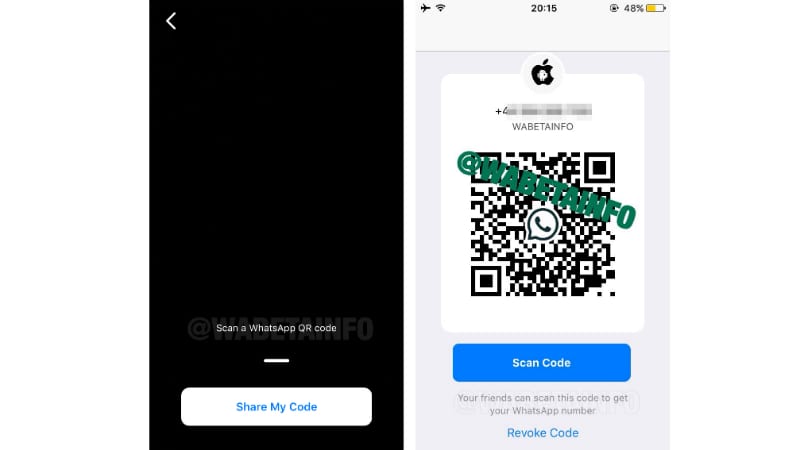 WABetaInfo claims that the feature was spotted on iOS, though it will be available on Android in future. We weren't able to see its presence on any of our iOS devices. Moreover, the feature is likely to be useful especially for businesses as they'll be able to publish their QR code directly on their websites or in their shops. This could help them receive payments or add their customers for future communications. It is worth noting here that WhatsApp already has its dedicated business app for SMBs, and WhatsApp Payments are already taking on apps such as Paytm, which also offers QR codes of its users for easy connectivity.

Alongside the Share Contact Info via QR, WABetaInfo reports that WhatsApp is redesigning the functionality to add a new contact through its app on Android and iOS. There will reportedly be a simple and intuitive interface that will automatically insert the country code once you choose the country of the new contact. Also, once you've entered the phone number, it will show whether the new contact is already a WhatsApp user. It will show a "Not on WhatsApp" label just below the phone number of the contact if that isn't on WhatsApp yet.

The new feature is said to replace the existing 'New contact' shortcut that made way to Android in Maya long time after being available on iOS.

WABetaInfo says that both new features aren't available on Android and iOS, though the WhatsApp team is working on the features for a few weeks. We may need to wait for sometime to experience their scope through an alpha or beta release of WhatsApp.

Australia’s past unearthed with new ev...