Redmi Note 6 Pro is the latest smartphone from the Chinese manufacturer Xiaomi that's set to launch in the Indian market. It succeeds the Redmi Note 5 Pro, which has been a popular choice in the sub-Rs. 15,000 segment in the country since its launch nine months ago. Xiaomi now faces competition from new models including the Asus ZenFone Max Pro M1, Nokia 6.1 Plus, Motorola One Power, and Honor 8X at around the same price. The Xiaomi Redmi Note 6 Pro will fight back against these competitors. It shares many of its internals and design elements with the Redmi Note 5 Pro, but also sports a new display 6.26-inch 19:9 full-HD+ display with a notch.

The smartphone will be launched at an event in New Delhi scheduled for November 22, at which
its pricing will be announced. The Redmi Note 6 Pro price in India is expected to be close to that of the Redmi Note 5 Pro, which started at Rs. 14,999 and went up to Rs. 16,999 — though the phone (and two other Xiaomi offerings) got Rs. 1,000 cheaper on Friday. However, given the recent hike in the prices of other Redmi models, the Redmi Note 6 Pro could be priced slightly higher as well. We got to spend some time with the Xiaomi Redmi Note 6 Pro ahead of its launch, and here are our first impressions.

As compared to its predecessor, the display on the Redmi Note 6 Pro has slightly larger dimensions and has a notch. It has a resolution of 1080x2280 and a maximum brightness of 500 nits. In our brief time with this phone, its display seemed to have good viewing angles, with accurate colour and contrast. We did, however, notice slight backlight bleeding along the top edge at the maximum brightness level. The 2.5D curved edges help the display glass meet the frame of the phone smoothly.

Apart from a few cosmetic changes, the Redmi Note 6 Pro strongly resembles the Redmi Note 5 Pro. The new model is 0.5cm thicker and slightly wider but feels the same in your hand as would the Redmi Note 5 Pro. On the front, the phone is devoid of any hardware or capacitive navigation buttons; instead users can choose from onscreen buttons or MIUI's gestures. There is a familiar dual camera setup at the back. There is also a small physical fingerprint sensor at the back. When we tried it, there seemed to be a slight lag unlocking the phone, but we will be testing it more ahead during our review process.

The Redmi Note 6 Pro sports the lock/ power button and volume buttons on the right, and a hybrid dual-SIM tray on the left. This tray can take either two Nano-SIMs or one Nano-SIM and a microSD card at a time. Storage is expandable up to an additional 256GB. On the bottom, there is (still) a Micro-USB port, the external speaker on the right, and a faux speaker grille on the left for symmetry. The 3.5mm headphone jack, microphone, and IR emitter are all placed on top of the smartphone.

Though the Redmi Note 6 Pro any kind of an IP-rating for dust/ water resistance, it does sport a water-repellant P2i coating, which should provide basic protection against spills and if you are caught in the rain.

The rear cameras are slightly improved. While there's still a 12-megapixel primary autofocus sensor and a 5-megapixel secondary depth sensor, both have wider f/1.9 apertures compared to the cameras on last year's model, theoretically allowing for more light to be captured for clearer shots. Daylight shots seemed crisp, in our limited time with the Redmi Note 6 Pro. We were unable to test low-light photography, but you can stay tuned for our final review, coming up soon, in which we will have full details of this phone's camera performance. 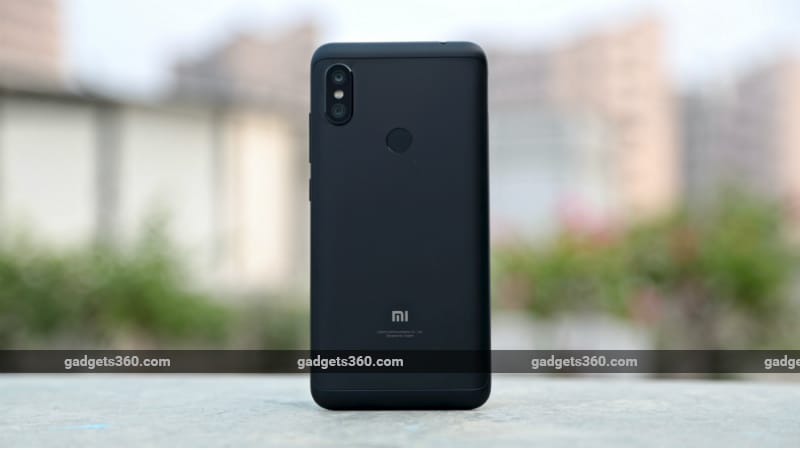 One of the major new features with this generation is the dual selfie camera setup. There is a 20-megapixel primary sensor and a 2-megapixel depth sensor on the front for portrait shots. Photos taken in good lighting were clear, and the bokeh effect was accurate.

The Redmi Note 6 Pro, much like its predecessor, has an all-metal back with a smooth matte finish, making it slightly slippery. The large body is also a little difficult to hold. Xiaomi does help you with a bundled TPU case for a better grip. Weighing in at 182g, the Redmi Note 6 Pro feels solid in the hand and is only about 2g heavier than the Redmi Note 5 Pro.

At its core, the Xiaomi Redmi Note 6 Pro disappointingly uses the same Qualcomm Snapdragon 636 as its predecessor. We would have preferred a slightly more powerful processor, such as the Snapdragon 660, which the Chinese phonemaker uses in its Mi A2 smartphone. Xiaomi could even have opted for the MediaTek Helio P60 SoC, now that Redmi smartphones are coming to India with MediaTek processors. However, we will have to wait till we can fully review the Redmi Note 6 Pro in order to find out whether this is still good enough, and whether Xiaomi has made any other tweaks to improve the usage experience.

The Redmi Note 6 Pro runs MIUI 10 on top of Android 8.1 Oreo, with no official timelines announced for an Android 9.0 Pie update. As with previous MIUI-based Xiaomi smartphones, this one too comes with a tonne of customisations, proprietary apps, and additional features. For starters, there is a Security app with functions including a RAM cleaner, security scanner, battery manager, data usage overview, and more.

The AI face unlock feature felt smooth on the Redmi Note 6 Pro. Registering a face was super fast, as was unlocking the handset. It isn't quite as accurate as 3D face unlocking, considering it can unlock the phone even when you are not facing it. We will test this feature thoroughly in our upcoming review.

The Redmi Note 6 Pro has the same 4,000mAh battery capacity as its predecessor, and supports the same 10W level of charging. It has a battery saver mode that can be customised to cut out activity from apps that might be draining the battery in the background.

Australia’s past unearthed with new ev...